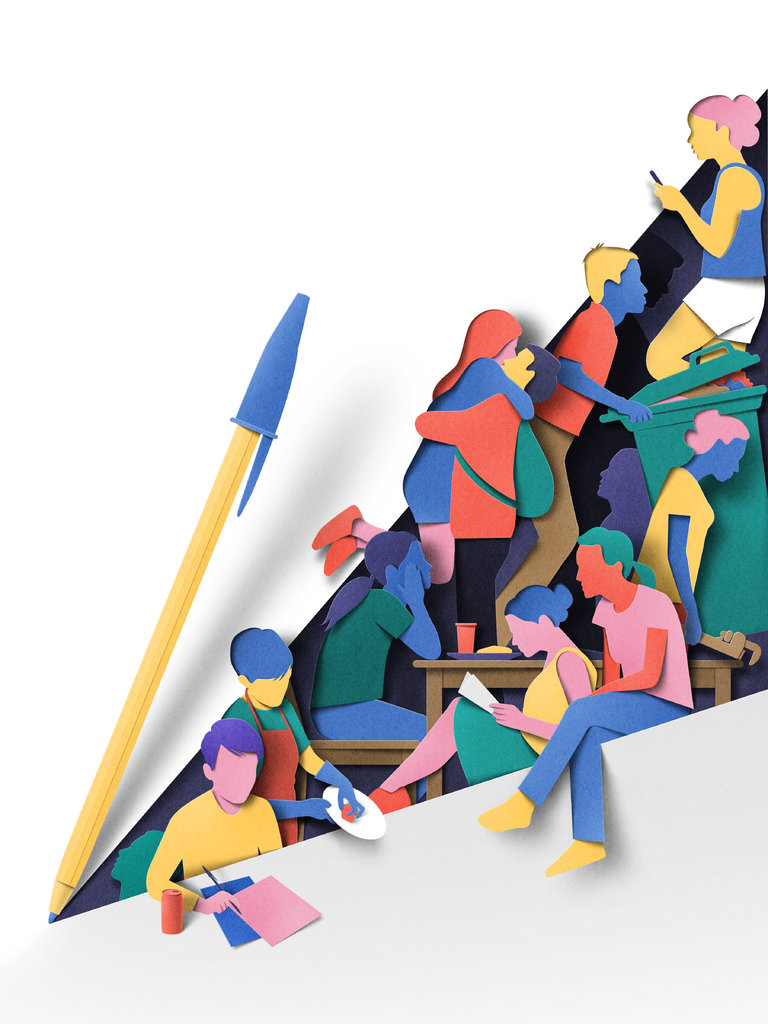 The money in our wallets is sorted by units of currency, dollars and cents, notes and COINS.

But the money in your head is much harder to sort out, lost in mood swings, pride and shame, joy and despair.

It's hard to deal with these feelings, so people don't talk about them much. It's even harder to write them down.

Six years ago, I started asking high school seniors for essays on money, jobs, social class or related topics. It soon became clear that we could learn a lot from their writing as they and their parents prepared to make perhaps the biggest investment decision of their lives: where to spend as much as $300,000 on a college education.

This year's five essays show how much money can be a rich topic for writers who dare to put pen to paper.

The daughter of a plumber and a young man obsessed with garbage trucks have taken up jobs few of their peers want. A dishwasher came home from school in the middle of the night with a study card in his hand. In an environment of aging furniture, a family becomes smaller and smaller. For years, a Minnesota teenager found herself in a new role at an old shelter.

People coming out of bars or parties give me their usual looks, either because my clothes stink after a long night of hard work, or because I'm talking to myself in a low voice as I frantically flip through my study CARDS.

I didn't quite understand the broken English that popped out of his mouth, but his frown was the universal language. It was a Friday night outside in Little Tokyo, a family was enjoying a five-star meal at a restaurant, and a 14-year-old boy in the kitchen was washing their dishes.

Wash the dishes by hand, soak them in disinfectant, put them in the machine, dry them, put them in their proper place, and then -- hopefully -- don't break one. But this evening, a China dish slipped through my soapy fingers and fell to the floor, breaking into five pieces. I tried to keep cool, but my face was still red and I was screaming, "why me! ?" As if the scream would restore the plate to its original state.

The broken plate was just one of many worries I couldn't keep my mind off -- a midterm in U.S. history, a low calculus grade, an apartment clearance notice, trouble with my brother, and a dozen other relatively trivial but pressing concerns.

For me, not calling in sick to clear my head and give myself some much-needed rest or time to study before exams. I have to help out. I shut up and went on working, using all the strength I had left. I know the pain of repressing emotions -- the salty, bitter taste of every drop of sweat, being lost in the background music, muscle pain.

The night shift finally ended at 12 a.m. I took the bus home, took out my notes and started studying. People coming out of bars or parties give me their usual looks, either because my clothes stink after a night of hard work, or because I spend the middle of the night on the bus muttering to myself as I frantically flip study CARDS.

I don't mind their stares at all. I'm used to it, just another set of speed bumps on my way to my goal. I'm tired of gang-waving hairpins, relatives with beer in their hands, or baba coming home late at night with work burns. Something had to change, and I knew it had to start with me. Fortunately, I also know that I have dedication, desire and perseverance in my bones. My grandfather was the first wave of Mexican immigrants to settle in Los Angeles. He later returned home to a small village in the rural state of oaxaca, carrying with him savings and the legend of the land of opportunity.

His parents left oaxaca in their teens and began working night and day in Los Angeles as cooks and homemakers. From the corn fields of oaxaca to the restaurants and classrooms of Los Angeles, this kind of hard work has been passed down from generation to generation, allowing me to cope with school and work.

In this evening, I walked into the house, inadvertently saw a let me happy accident: hard all day mother fell asleep when waiting for me to come home. I put the tip I got that night in her purse and turned off the TV.

I stared at my brother and sister in their bedroom as they fell asleep in their sweet dreams. I yawned as they snorted and breathed slowly, and found myself exhausted. But it will be some time before I can rest with them. I have a paper due tomorrow morning, and Mr. Depaulo doesn't accept homework that isn't due on time.